From ‘Malcolm & Marie’ to ‘The Gone Game’, titles shot in isolation during COVID-19 pandemic lockdown across the globe

Take a look at a few films and series that were shot in isolation during the COVID-19 pandemic lockdown across the globe.

Since the COVID-19 pandemic hit the world last year many of the large and small scale industries, institutions, organizations shut their shop to prevent themselves and their employees from the virus and allowed them to work from the confinement of their homes. The film industry across the globe was one such industry that was majorly hit.

Many actors and filmmakers decided either to indefinitely postpone until the situation turns better and safer to film. Some filmmakers across the world turn this into another opportunity and instead of sitting at home ideally decided to make some interesting films and series from their homes over the highly popular video chat app Zoom and Skype.

Check out a few of them in detail below: 55km/sec is a short film shot on an iPhone amidst a global lockdown; the film is produced and directed by sci-fi expert Arati Kadav, as her newest outing. She is best known for last year’s sci-fi film Cargo that was released on Netflix in September last year. The filmmaker seems to have upped her game this time around shooting an entire film locked at home. The film that rides on its high concept idea stars Richa Chadha in the lead part. The film takes forward the idea of living in a world stricken with fear as it narrates the story of an asteroid that’s about to hit the earth. The film was earlier released internationally on Amazon Prime Video US and UK. All Rise is a legal drama TV Series aired on CBS with an episode crafted after actors and production staffers began isolating themselves in their homes. All Rise is the first network TV drama to shot a new virtual episode about the COVID-19 pandemic. The story revolves around on lead character, Simone Missick’s Judge Lola Carmichael, to conduct a trial over video chat with attorneys, court staff, and even the judge herself appearing from their homes in a proceeding live-streamed publicly. En Casa: At Home is an anthology as branded by the makers having five Films and Television directors creating the project. The series is shot entirely from the conferment of all the actors and technicians from their homes during the coronavirus pandemic. Each episode of the series is 15 minutes long. The series has different moods and emotions set such as romantic comedy, drama and fantasy. The series is set to premiere soon in the 21 territories of HBO. The film Host directed by Rob Savage was shot completely during the Lockdown in 2020 and was released in the US through an OTT platform. The film received a perfect 100% rating on the recommendations and film review aggregator Rotten Tomatoes. PictureWorks has acquired the rights release HOST, in India across four languages with an English release happening today including a subsequent release later in May in Hindi, Tamil, and Telugu on the OTT giant platform Amazon Prime Video Malcolm and Marie is an American romantic drama film shot in the black and white format. The film is written, produced, and directed by Sam Levinson. The film stars Zendaya and John David Washington also produced it. It’s a love-hate story of a writer-director played by Washington and his girlfriend played Zendaya. Their relationship comes to testing waters on the premiere night of Washington’s latest film. It is said to be Hollywood’s first feature that was entirely shot during the COVID-19 pandemic lockdown. Malcolm and Maries released digitally on Netflix in February 2021. 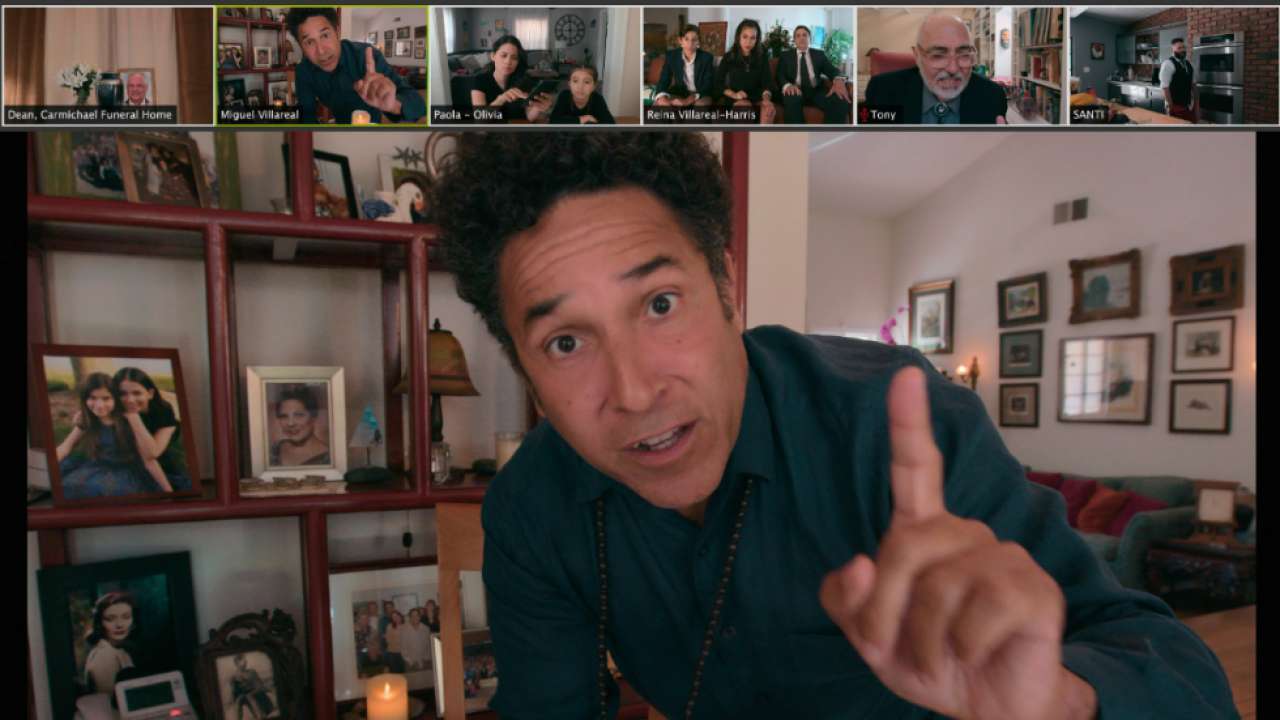 Social Distance is an American TV anthology series created by Hilary Weisman Graham and Jenji Kohan that premiered on Netflix in October 2020. The entire series was shot remotely during the quarantine period. It’s an eight-part series, set during the beginning of the COVID-19 pandemic, centres around how families, friends, and couples were forced to cope with the effects of quarantine as well as during the Black Lives movement. Each episode narrates a different story and highlights “the power of the human spirit in the face of uncertainty and isolation,” and how technology turned out to be the last resort to stay connected during this difficult time across the globe. Songbird coming from the house of Michael Bay, Adam Goodman, Andrew Sugerman and Eben Davidson is a 2020 American dystopian science fiction thriller film based on the coronavirus pandemic. It is said to be the first film to be shot entirely after the shutdown was imposed between July and August in Los Angeles. The film is directed by Adam Mason, who wrote the screenplay with Simon Boyes. The film stars KJ Apa, Sofia Carson, Craig Robinson, Bradley Whitford, Peter Stormare, Alexandra Daddario, Paul Walter Hauser and Demi Moore. Songbird was released through premium video on demand in December 2020. The Agoraphobics Detective Society is currently being shot from home starring Brian Cox, Claes Bang, and journalist-presenter Mariella Frostrup, among others. Maggie Monteith has an all-female team of writer-directors on board to conceive the idea of the project. The makers also attached the noble idea with the project by sharing the proceedings to the UK and U.S. film and TV freelancers impacted by COVID-19. The eight-episode show will see a distraught group of patient’s coming together to find a renowned expert psychiatrist who disappears without a trace. The Gone Game is a psychological thriller web series directed by Nikhil Bhat, starring Sanjay Kapoor, Shweta Tripathi, Arjun Mathur, Shriya Pilgaonkar, Rukhsar Rehaman, and Dibyendu Bhattacharya. The series was shot entirely within the confines of all the actors’ homes and directed remotely, during the COVID-19 pandemic in India last year. The show was premiered on Voot in August 2020. The Gone Game is a four-part series and is one of the best examples of quarantine content, the paranoia and unease is the highlight of the plot. The makers are all set to bring back season two owing to its popularity. Wakaalat from Home is a comedy or errors series that was filmed during the initial months of lockdown. The series includes four main characters Sumeet Vyas, Kubbra Sait, Nidhi Gupta and Gopal Datt. The unusual premise covers a divorce proceeding over a Zoom meeting called during the lockdown. The show is directed by Rohan Sippy and it was aired on Amazon Prime Video in September 2020.

News in a flash

Issue Is Whether China Will Live Up To Commitments: S Jaishankar On Ladakh